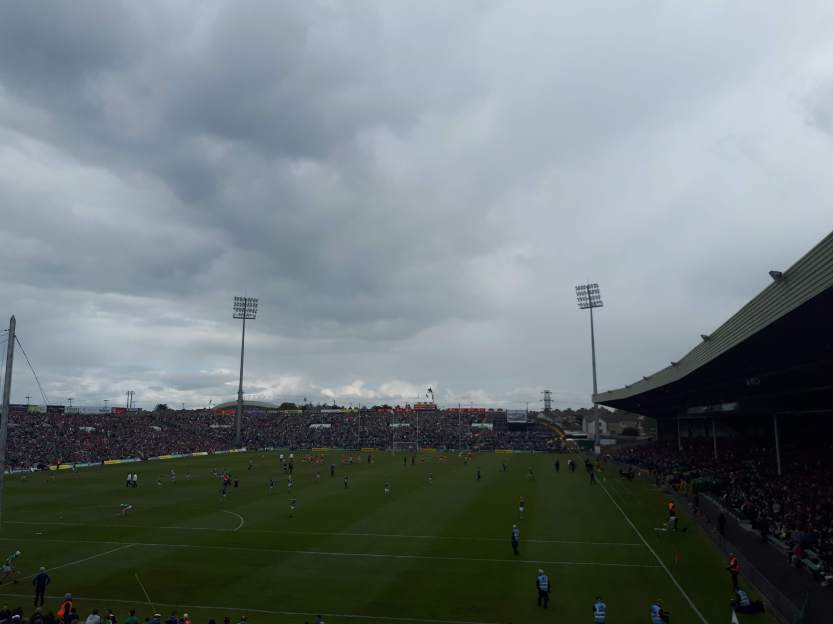 During my formative years on the terraces around the county and country, it was a place where summer ended before it had even started. Tipperary in 1988,  Clare in ’93, Limerick in ’94 and Clare in ’95 and ’97 all dashed whatever dreams that were there and in 1996, for good measure, Limerick came to Cork both physically and metaphorically to ensure another long winter.

Journeys can often be more enjoyable than the destinations they bring you to, but this wasn’t true of Sunday morning’s bus ride from Killarney. The smell of stale porter, fresh porter and what can only euphemistically be termed as ‘manliness’ didn’t make for a pleasant trip. And then came the singing. Never was I so happy to take my place in the Clare End terrace.

The old version of the Gaelic Grounds was particularly horrid, with its gravelly terraces, long grass and capacity for pain. The newer version is much more comfortable, though the Mackey Stand still is what it is. More importantly, however, the new arena has been a bit kinder. And it never looked better than it did on Sunday evening.

The three changes to the team (Bill Cooper was more of a return than a change) that seemed so radical on Friday night all make perfect sense now. That was inevitable – the success, or otherwise, of the minor surgery was always going to be dictated by the result and the performance, in that order too.

Robert Downey just did what he needed to do, making sure that Gearóid Hegarty didn’t win primary possession – or secondary possession for that matter – Mark Ellis slotted in like he’d never been away and Aidan Walsh gave an exhibition of simplicity. Knowing your limitations and embracing them is a much undervalued skill and he performed selflessly for the team.

It had everything that the Tipp game didn’t as Limerick performed pretty much as Cork did on the previous Sunday. However, people will be a lot slower to stick the knife into them. It always amazes me how pundits seem to forget that they may have found themselves in situations similar to Cork’s last week, yet still take glee in twisting the blade.

On RTE Radio afterwards, John Mullane mused on his frustration with Cork’s inconsistency. There’s a slight flaw with that perceived fault in this Cork team when it comes to championship hurling (their mediocrity in the league is a point of consistency at this stage too).

What made the Tipp game so frustrating was that we’ve come to expect performances like Sunday from this Cork team over the past two years. Two Munster championships and two All-Ireland semi-finals that could have or should have been won isn’t bad work. Nor is losing just two of their last twelve championship games in normal time.

Sunday was all anyone could have asked for in terms of a response; a convincing victory, two points on the board, an important head-to-head advantage, points difference back to zero and, most importantly of all, a better looking panel.

Had Alan Cadogan been available last year who knows what would have happened, but now that he’s back with a bang there’s a genuine depth of class in the forward division. The excellence of the defence was the biggest improvement on the previous week and the possibility of Colm Spillane returning will only strengthen things at that end too. As we found out last year, the strength of the panel will be the key to going deeper into summer, though it’s no guarantee either.

The performances of Fitzgibbon and Coleman were particularly pleasing in Limerick. Despite their youth, they’re recognised as two of the most important cogs in Cork’s machine. This brings its own pressure in terms of performance, but it also invites a lot more attention from the opposition.

In particular, it was very clear on Sunday that Limerick focused on bottling up Fitzgibbon when he gained possession, to prevent him from finding the space he craves. He was hounded, and only once did he ever really break free the way he usually does. But he found another way to contribute,  a different way to play well and that’s what it’s all about really, finding a way to get over the line.

When all’s said and done, however, it was still only one game, and they’re are only two more left to find a way through the swamp. Who knows what state Waterford will be in when they come to Cork on June 8th? If they’ve beaten Limerick they will have it all to play for but if they haven’t, all is lost. But this did not stop them giving Cork a hell of a battle in Thurles last year. I’m sure nobody in the Cork camp has forgotten that.

Beyond that? There’s no point in thinking about it or talking about it. The last week-and-a -half has proved, more than ever, that this Munster championship needs to be taken one step at a time, that there is nothing certain about it apart from its uncertainty.

All attention now must be focused on beating our friends from the east. And after that we’ll see what happens.

For now, it just feels great to be alive.