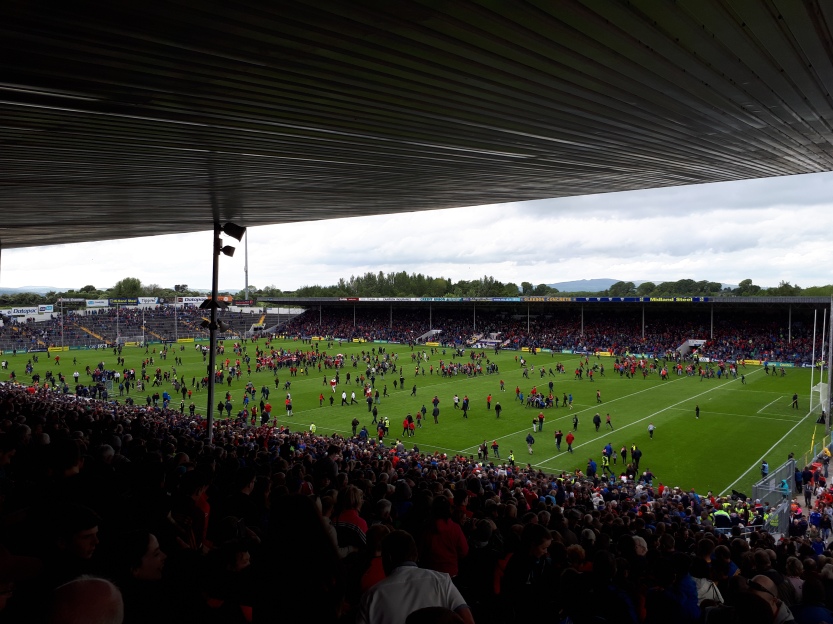 We don’t expect much, really. And by that I don’t mean that expectations were particularly low on the road to Thurles. What I mean is that we don’t expect to be winning All-Irelands every year. We’re not delusional. All we really want to see on the field is the minimum required to be competitive. A good work-ethic, pride in the jersey, a willingness to dig in and lots of desire. Once those things are there you get a chance to hurl and then, well then things can happen.

It’s impossible to think about Sunday without contrasting it with the debacle of 2016. There was something particularly miserable about that day and it was probably the lowest we’ve reached since 1996.

The rain, the sweeper, the 9-point defeat that might as well have been 19 and the realisation that you couldn’t even expect Cork to bring the minimum to the table, that Cork were becoming irrelevant. But it was this dismal display that made Cork/Tipp 2017 so cathartic. Everything that was missing last year was back, and they delivered plenty more with it.

Cork played on Sunday like they were sick and tired of being sick and tired. They were sick of being told what was wrong with them, sick of being told how bad they were, sick of having their character questioned and sick of the faux-sympathy for Cork’s plight from the wolves in sheep’s clothing. It’s that sympathy that grates more than anything else and all you can do is grin and bare it, and maybe lock it away for future reference.

But playing with fury and anger will only bring you so far. It will only bring you a certain level of performance and it’s usually of the ‘heroic defeat’ variety. Cork had much more than that in Thurles. They got the balance right between fury and calmness. They played with aggression, panache, flair and more than anything else they moved the ball smartly.

This started with Anthony Nash in goal. His distribution was patient and accurate and his save from Séamus Callanan was vital for more than the obvious reason. It was also the moment when the connection with the crowd really became apparent. There was a guttural, primal roar when Callanan was dispossessed after the save that seemed to confirm that this wasn’t simply just a plucky performance and began to heal the wounds of the past couple of years.

Throughout the field Cork were using the ball really well. Darragh Fitzgibbon gave an exhibition of doing the right thing at the right time, Mark Coleman’s vision was phenomenal and every player seemed to have time to look up before delivering the ball. One of the main reasons that they had this time on the ball was the manic work-rate of everybody. It’s amazing how such a simple thing can shape a game. It has been a forgotten art.

All the time we were waiting for Tipp to up their game and go through the gears. We waited and waited but Cork just continued to defy expectations.

Every goal that was set for Cork in the stands and on the terraces was achieved. Get to half-time in contention. Start the second-half strongly. Sneak a goal. Be in it with 15 to go. 10 to go. 5 to go. Answer whatever Tipp throw at them (Conor Lehane’s and Shane Kingston’s points after John McGrath’s goal were spine tinglingly good). Then came Mickey Cahalane and that’s just a story that’s so good that it makes you think that there just might be a God. And for the first time in a while he was wearing red and white.

To a man, the players were magnificent. There’s no need to say anymore . But there’s a huge amount of credit due to the management too. It must have been hard to go back to it after last year. But they’ve showed courage and also seem to have instilled some old values into the camp. Kieran Kingston’s comment on how they didn’t pick players because they were young but because they were the best players was so refreshing to hear. It implies that all places on the team are earned  and not entitled. Again, it’s basic. But now it’s back.

Even the soundbites in the emotional aftermath struck the right tone. They don’t need to be told that one swallow doesn’t make a summer. They’ve seen enough winters, been told enough times what they’re lacking and now need to keep things on their own terms.

So the question is, are Cork back? Unfortunately that can’t be answered after just one game. All that can be expected of Cork the next day against Waterford is a similar level of performance. Then wait and see how far that performance takes them. It should take them close enough. One thing is certain, however, the next time I’m booking a summer holiday, I’ll be paying more attention to the championship programme. Evidence enough, perhaps.