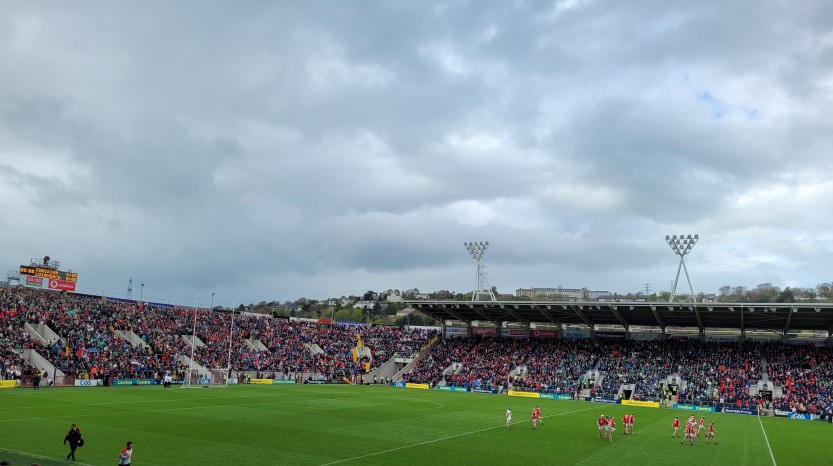 We saw or experienced nothing that we hadn’t already seen or experienced as Cork supporters in Páirc Uí Chaoimh last Sunday. It was just yet another exemplar of over a decade of flattery to deception.

We’re all well versed in all of our seemingly eternal flaws. Our lack of tenacity, our lack of solidity up the middle, our errant tackling, our sonambulance when the ball goes dead, our propensity to leak goals at key moments, our inclination to concede massive scores.

However, the familiarity of these flaws that have again been laid bare doesn’t make them any less hurtful or any easier to explain. We all know what the issues are, and yet there they still are, haunting us in perpetuity.

What our last two outings have proved beyond reasonable doubt is that whatever Cork are trying to do isn’t working. We all know the age-old definition of madness as trying the same thing over and over again while expecting different results. And yet, here we are.

On Sunday, it didn’t even feel as if Cork was expecting different results either, it was more of a sense that they hoped everything might be ok. There was an exasperation and a nervousness to their play that a team like Limerick are always going to exploit mercilessly.

One of the greatest attributes that Cork have is pace. However, everything that they did on Sunday seemed to negate this. There was a lack of urgency and a staggering lack of movement up front. This lack of movement led to an overplaying of the ball at the back that in turn led to the second goal which was exactly the type of goal that Cork have been threatening to concede for a long time.

With the pace gone out of Cork’s game, everything looked laboured, overly structured, and too predictable. It also made sure that Limerick always had time to get organised at the back as they were never threatened with the type of quick ball, either from open play or re-starts, that can make a defence creak. The most frustrating part of this was that the space was there, but there was just nobody willing to utilise it.

We live in the era of pressing in all sports. There’s a beautiful simplicity to the theory behind it even if putting it into practice takes endless time and effort. Fundamentally, it’s all about putting pressure on the ball. Everybody looks good when they’ve time and space, but should they be faced with an aggressive press, any kink in the armour will be exploited.

Once Kyle Hayes got inside of Damien Cahalane, a goal seemed inevitable as nobody in a red jersey made a move towards him to try and force him into a decision. The contrast with how the Limerick defence descended on both Darragh Fitzgibbon and Lehane after Cork had created a lifeline for themselves was stark. They scrambled back, forced the miss and Cork came away empty handed.

Another prime example of Cork’s passivity when it came to pressing was on Limerick’s puck out. Rightly, we had ourselves tied up in knots over limiting the impact of Cian Lynch and thus, Ger Millerick acted as a screen in front of him often throughout the game, particularly on the Limerick puck-out. In response, Darragh O’Donovan often hugged the sideline and was an easy outlet for the Limerick full-back line after they received the ball from Nicky Quaid.

Cork put no pressure on the man in possession, so the ball was moved all to easily into a position where Limerick could hurt Cork. Which they did, repeatedly. It was all too easy and in many ways, it was far worse than the capitulation in Croke Park last August.

Which bodes the question, where do Cork go from here? Essentially, they are faced with Hobson’s choice. They either stick rigidly to what they have been doing or they change it up, radically, to try and get the best of the talent that they have at their disposal.

What’s been tried and tested has failed in the two biggest games of the year. Were they to stick with it, it might give them enough to limp out of Munster but it will inevitably be found out again thereafter.

Change in structure or personnel doesn’t guarantee success either, but if Cork are to ever escape Groundhog Day they really need to stop trying to force square pegs into round holes and find a way to get the best out of what they have.