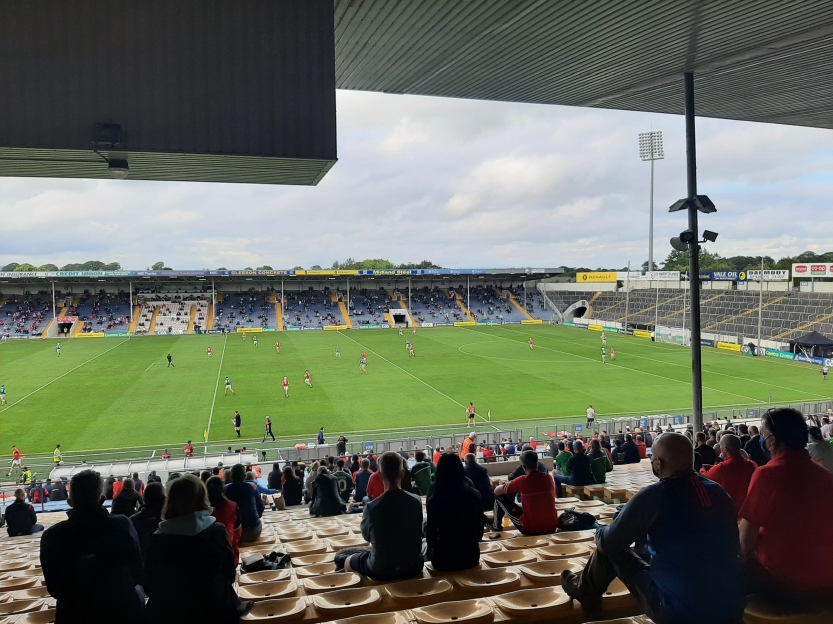 Before Saturday’s game against Limerick, the one thing we were all looking for from the game was a performance.

Now that the dust has settled, what did we learn?

Well, a lot will depend on what type of person you are; do you see your glass as being half empty? Is it always half full? Or, are you more inclined to dispense with the glass altogether, and look to hook it into your veins as quickly as humanly possible so you can completely forget everything that you have just seen immediately?

While we have had many days over the past ten years that would make us choose option three, Saturday wasn’t one of them. However, it wasn’t a good day either and in the immediate aftermath of the game it felt like a missed opportunity.

The post-game consensus seems to be that Limerick were well below par but still managed an eight-point victory without too much difficulty. As they look forward to their next trip to Cork, they can be happy that they got what they needed even though Aaron Gillane, Gearóid Hegarty, Tom Morrissey and Séamus Flanagan were all withdrawn without any of them having had their usual influence on proceedings.

From a Cork perspective, the question must be, did Limerick just underperform or did Cork make them underperform?

Champions are rarely dethroned by a side that mimics them. There’s not much point in copying Limerick as nobody does what they do better. Throughout the league, Cork seemed to be preparing to mirror them to an extent by giving Mark Coleman the freedom to hold the middle, with others picking up the slack, as I’d written before the game.

But that’s not what they did at all on Saturday. They didn’t try anything particularly new, just something different, something that you wouldn’t necessarily expect from a Cork side considering our recent defensive record.

They went completely man for man, and, in general they got their match ups spot on. The only exception to the rule was when Cian Lynch inevitably drifted out beyond midfield. When that happened, Ger Millerick picked him up.

This tactic, however, is fraught with danger. You’re dancing with the devil as you’re left wide open to potential cataclysmic damage on the back of one, slight individual error. It’s an energy sapping tactic and is made for the once off as opposed to being a long-term strategy, but Saturday night was a one off shot at the champions.

It was probably a harsh penalty, but the fall-out from Patrick Horgan’s atypical miss was exacerbated by a tactical switch. With Peter Casey in the sinbin, Niall O’Leary was assigned to Cian Lynch thus leaving Mark Coleman free. All of which probably makes sense, but it seemed to unsettle Cork. What had been working was changed, and all of a sudden Lynch had two points on the board.

Then came the goals. Kyle Hayes’s strike was particularly devastating. Over thirty-seven minutes had been played and Cork seemed to be waiting for the half-time whistle. Hayes wasn’t.

It all meant that what had been as good as a defensive display that Cork had put in a while was ruined in about four minutes. In the immediate aftermath of the break, it looked like it was going to get an awful lot worse too.

But it didn’t, and Cork hung in there. Then they lost Séamus Harnedy to injury, then Jack O’Connor became the first player in the game to get called for steps after he’d broken through the Limerick half-back line, and then there was the long game of ping pong when Limerick couldn’t stretch their lead to five and Cork couldn’t reduce it to three.

This game-within-a-game reached its climax with Eoin Cadogan’s wide and all those things that Cork needed to go right were going wrong.

To return to the question that I originally posed; did Cork force Limerick into an under performance or did the champions just not play to their usual standard?

Probably a bit of both, but I think it was more a case of Cork posing them plenty of questions. As already stated, Cork didn’t play particularly well but they were fiercely competitive. To get over the line in these games you need big performances from your big players and Cork just didn’t get enough of those. And they just didn’t score enough to really put the pressure on Limerick.

Patrick Horgan was the epitome of that during the game. For whatever reason, he just didn’t play to his usual standard and the more he tried to force it the more it slipped away from him. He shouldn’t spend too long dwelling on that.

What does it all mean?

That nothing has really changed. For Cork to be a serious team again, they need to win a tough, close championship game. The longer it takes, the harder it becomes. And it’s been a long time, giving us plenty to ponder as we face into the qualifiers..

When they manage to break one of those trends, they’ll feel better about themselves, and other teams will take notice. Until then we’ll just have to wait.

Of course, part of the reason for these droughts is our under-age record. Even our good teams aren’t getting the job done.

With all of that in mind, this weekend’s U-20 final is as important a game that Cork will play this year.

The very best of luck to all of those involved. It would be nice to celebrate a victory in a measured way.

One thought on “What are you having?”