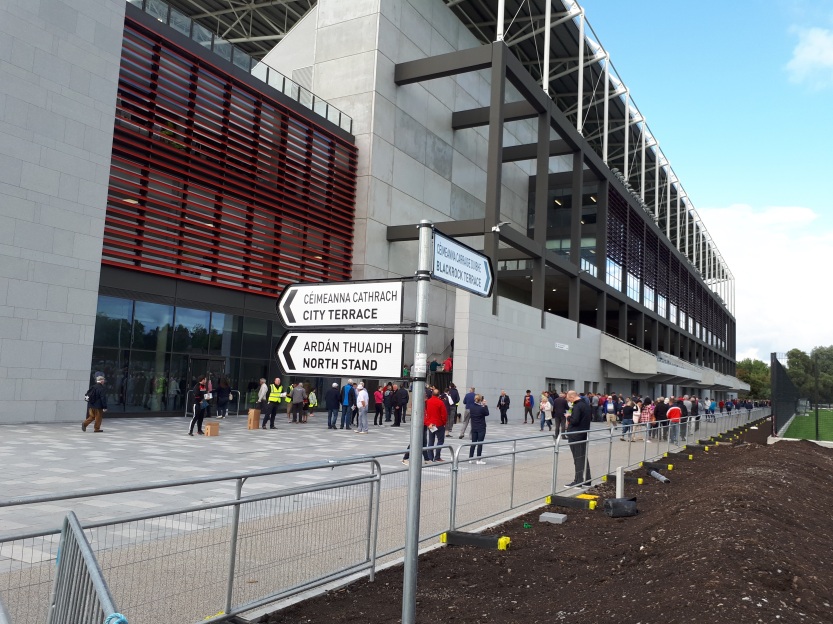 Being completely honest about it, if you were offered it during the week, you’d probably have taken it.

Cork lost to Tipp in 2016 and were so far off the mark in every possible way in 2017 and 2018 that we’d finally reached that tragic search for the one thing that should always be a given; a performance.

There’s been enough written about Cork football over the past couple of years. And there’s been plenty of outsiders gleefully twisting the knife to make a follower just put the blinkers on and focus on what’s happening on the pitch. Because that’s all that matters anyway.

Of course, the pitch hadn’t been a particularly pleasant place to focus on, until yesterday evening. It was just brilliant to see a Cork team play with resilience, defiance, physicality, a bit of poison and, obviously, some good football.

But yet, the prevailing feeling walking up the Monaghan Road was one of a missed opportunity. Cork gave the performance that we all, and the players more than anyone, craved. There was a moment in the second half when the crowd simultaneously recognised that this was something different, that the game was there for the taking and, most importantly, connected with the team again.

There’s nothing worse than that numbing feeling of irrelevance that had seeped into affairs over the past few years and it was great to see the players and the crowd remember what Kerry represent for Cork football fans.

On the Sunday after the game against Limerick, Pat Spillane compared Cork’s evisceration of them to watching Barcelona in a tactic straight out of the first chapter of Cute Hoorism. Cork people are sick of this false praise, this nonsense of pretending to acknowledge Cork as a legitimate threat. And the way it transpired this year was particularly false. It was like they were trying to convince themselves more than anything as nobody else was buying their bluster.

For Kerry, Cork are a crutch. A decent test before things get more serious. When that crutch is taken away, they’re left with that most crippling of enemies on the road to Croke Park; doubt. They need Cork to be good without ever having the temerity to be too good. They should always know their place.

My experience of this reached its nadir (or another nadir anyway) on the terraces of Killarney two years ago. As the clock ticked down and Cork were beaten back to Ballyvourney and beyond, a Kerry sage decided to engage with us on how it was such a shame that we were so bad. All we could muster was silence and a nod as the inner fury raged away.

Of course, he didn’t care in any shape or form about Cork, he was only worried about what damage the no-show would do to his beloved Kingdom – as was his right. But that’s the thing with the Kerry concern for Cork football; it’s like a man who’s stolen your wife coming to you and telling you how much of a struggle it’s been for him, while he ruffles your hair.

In general, this game felt like one we’d seen 100 times before. A highly motivated Cork team, playing with a high intensity, taking the game to Kerry but not quite getting, or taking, what they deserved from all of the good work they put in.

Even when Cork are ahead of Kerry, they have to be five or six points better to win by one. That’s the nature of a rivalry such as this one. It’s the hardest thing to change, that culture. But it is possible.

If the devil’s greatest trick was convincing the world that he didn’t exist, what’s Kerry’s?
Probably convincing the world of their commitment to the beautiful game. A game free of cynicism, hand-passing, sweepers, defensive-minded half-forwards; a game full of flair, expansiveness, Corinthian spirit and elegance.

They’d certainly convinced Anthony Nolan anyway, because that’s the only way to explain the imbalance in the free count. Did Cork foul on 20 plus occasions? Probably. Did Kerry only foul 11 times or so? Probably not. And I’m certain that Mark White wasn’t trying to waste time over his kick-outs.

When you strip it all down, however, Kerry deserved their victory even though Cork had a genuine chance of taking them down. Why did they deserve it? Because they’ve better forwards and were much more clinical than Cork were, particularly when the need was greatest in the last fifteen minutes.

Cork had chances but didn’t take them. More often than not, Kerry took theirs. Same as it ever was, I suppose.

What made the performance better, however, was that you could see the beginnings of a new Cork team on Saturday night. A team that can move on from the last few year’s and give a genuine reflection of where Cork football is at.

Three more games against high level opposition would do them the world of good. And they’re still only seventy minutes away from getting them.

Those seventy minutes will define the season.

One thought on “Taking What’s on Offer”